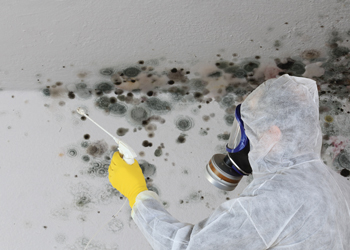 Exposure to mould inside your home can have a profound effect on your health.  Mould accumulates in damp conditions along with poor ventilation within the building.  Prolonged exposure to dangerous mould spores can have a devastating effect on your breathing system, causing wheezing, nasal congestion, throat irritation, coughing and chest tightening.

According to the World Health Organisation, a considerable number of the 300 million worldwide cases of childhood asthma can be attributed to dampness and mould.  Mould can also be deadly with the strain of “black mould” (Stachybotrys chartarum), causing the death of a child in 1994 from bleeding from the lungs.

With these alarming figures, it is important to take steps to remove the mould from your home.  In addition to the visible mould, there are other signs of dampness.  These include odour, water stains, frequent condensation, peeling and cracked paint and wallpaper, water puddles around the outside of homes.  To combat mould and minimise the risks follow the steps outlined here;

If there is a sign of visible mould then bleach the area, this will kill the mould.  If the mould has penetrated large areas, then removing carpeting and any other large items will help stop the spread.

Although mould has an adverse effect on people with pre-existing health conditions, it can also affect healthy individuals; therefore, it is important to treat any mould growth within your property quickly and efficiently.

Preparing your property for renting